Blog Tour - A Gathering of Ravens by Scott Oden

It is my turn on the blog tour to talk about Scott Oden's new book, A Gathering of Ravens.

To the Danes, he is skraelingr; to the English, he is orcneas; to the Irish, he is fomoraig. He is Corpse-maker and Life-quencher, the Bringer of Night, the Son of the Wolf and Brother of the Serpent.

He calls himself Grimnir 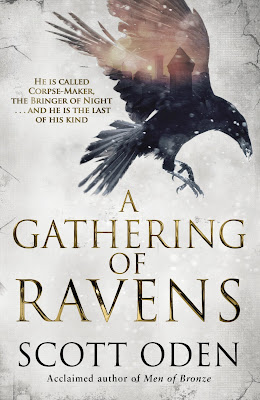 Grimnir is the last of his species. His kind has tormented the human race since time immemorial. Their reputation has meant that people have given them the chilling names of Corpse-makers and Life-quenchers. His great age had forced him to stay deep in the shadows, but now he has emerged for one thing only; vengeance. The world has changed since he last saw the sun, the Old Ways have retreated and a new religion has gained traction and support in the world, but Grimnir will not be swayed from his destiny. He kidnaps a follower of the Nailed God to use as a guide on his journey from Denmark through war-torn southern England and across the sea to the city of Dubhlinn where his enemy and foe awaits.

Scott Oden has deftly woven a story set in the Dark Ages with elements of mythology and fantasy permeating the plot, without feeling like that one has been bolted onto the other. The plot pace varies throughout, with the battle scenes feeling suitably realistic whilst managing not to glorify the gore. The pace did twist and turn reasonably well as well as Grimnir turbulent relationship with Étaín, his captive, adding much-needed depth to the plot, however, I felt that there were the odd time when it dragged unnecessarily. There is excellent detail on the landscape that they travel through in the time set, with only the odd minor discrepancy as far as I could see. What was refreshing for a fantasy book is this is a standalone volume with no sequels; there will be others set in the same world with the Grimnir character supposedly, which I will defiantly be reading. 3.5 Stars

One that I would definitely recommend for those that want to read something different in the fantasy genre. 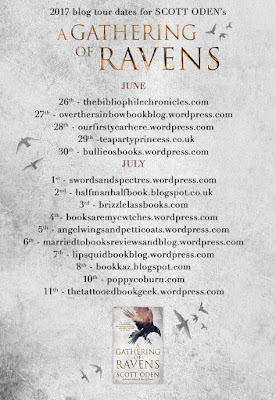