I have managed to read 21 books so far for my The World From My Armchair Challenge. Not as many as I hoped, but steadily working through it. I have at least another 21 books here that I will definitely be reading in 2018 towards this. One of the pleasures of the challenge is finding the books to match against a country.

Travel books are first on the agenda in January too as on the 10th the shortlists for the Edward Stanford Travel Writing Awards are announced. They always manage to pick the absolute cream of a very good crop of books. I will be reading and reviewing all of the books for Nudge and can probably get some into my challenge.

I seem to end up reading a lot of prize shortlist and longlists now. The Wainwright is a particular favourite and I have three left to go from the 48 that have been longlisted. Will also be reading those that appear on the  Royal Society, Wellcome and Ballie Gifford and this year as I want to back into reading more science fiction, then I will try to fit in the shortlist for the Arthur C Clarke award too.

I am intending on making inroads  into my backlog of review copies. 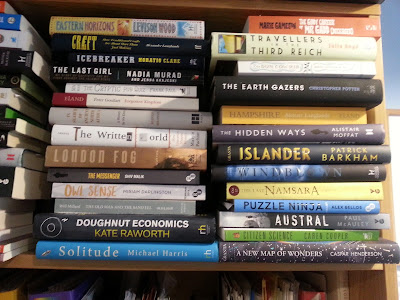 I am very grateful to those publishers who are kind enough to send all sorts of books that they think would interest me. I am getting to them. The books that I really want to read in 2018 are here (Now Updated)

In 2017 I had intended to read the remaining Discworld books that I hadn't read so far, but  I didn't read a single Terry Pratchett apart from Good Omens: The Nice and Accurate Prophecies of Agnes Nutter, Witch. So this year I will be completing the Discworld ones that I haven't read, starting with The Last Hero, and then going onto these:

I did read ten Science Fiction in 2017. Not as many that I had hoped for, but I am now on the Gollancz reviewers list so fully expect to be reading more next year. I have promised for ages to read some  steampunk! This year. I promise.

As there have been complaints from my other half, Sarah, about the amount of books piling up around the house, so I am going to make an attempt to reduce my library books, and make inroads into the books I have bought from charity shops too. But it is quite often like this: 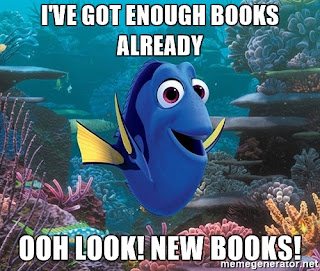