Well that was a busy month, didn’t seem to stop around the house, but we now have finished three rooms downstairs and have stripped the hall and I an half through the lounge. This didn’t leave much time for reading though, so only managed to read 14 in the end.

And here they all are: 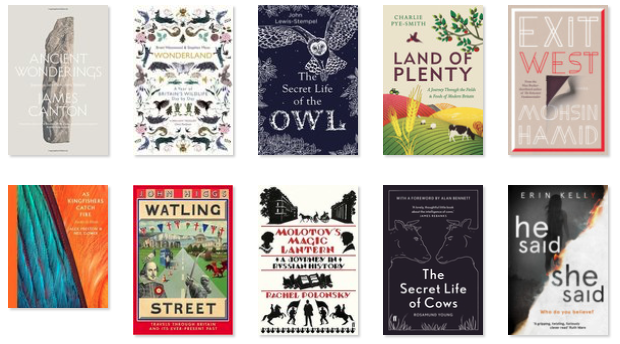 I managed to read two fiction books this month, Exit West, one on the shortlist for the Booker Prize. I have read others of Mohsin Hamid so had high hopes for this one. It was good, as he is addressing the reasons behind emigration and the problems associated with people living in a strange city, but there were certain elements that I thought jarred with the rest of the book. He Said, She Said was a domestic psychological thriller, that was reasonable, but had the odd implausible moment, but it was fast-paced and twisty.

My least favourite books this month were travel and both about Russia, Molotov’s Magic Lantern was about Rachel Polonsky’s time spent in Moscow in the apartment block that Vyacheslav Molotov had lived in and there were the remenants of his library there. The Second was Black Dragon River, where Dominic Ziegler travels down the river Amur that is the border between China and Russia. Both have their fascinating points, but they were very heavy on the history of Russia in my opinion.

Read two books that had a title beginning The Secret Life of… The first was The Secret Life of the Cow published by Faber. It was a reprint of the book by Rosamund Young and was a fascinating little story of her farm and the cows and other animals growing up on it. The other was The Secret Life of the owl by the very talented and twice winner of the Wainwright Price, John Lewis-Stempel. A delightful book on the owls around his farm and the wider landscape with the quality of prose that I have come to expect from John, and a fine addition to my growing library of natural history books.

Read three books on the UK this month, the first of which was Watling Street where John Higgs follows the path of the ancient road that stretches from London all the way to North Wales. Along it he re-discoveres the long history and contemplates the state of modern Britain post Brexit. The second was by Charlie Pye-Smith as he travelled back and forwards talking to those responsible for growing our food. The final one was Ancient Wonderings by James Canton. In this he travels to various Neolithic sites in search of the traces that are still left over. It is a really interesting read and it shows that the more we find out the less we know of their lives.

Read my third book from the Baillie Gifford shortlist, The Odyssey. It is a touching story of a father and son as they look at the life lessons from this epic tale and the author learns more of what made his father the man that he was. I was on the blog tour for The Cabinet of Linguistic Curiosities by Paul Anthony Jones another fine book on forgotten words from our language, with a word for each day. Really good and a must read for any etmologists.

Finally two natural history books, Wonderland, where Stephen Moss and Brett Westwood take us through every day in the year with animals, birds, plants, trees, moths and all sorts of other things to see in the natural world. A really wonderful book, and one I will be buying in paperback. The final book was As Kingfishers Catch fire by Alex Preston and some stunning illustrations by Neil Gower. This is an utterly beautiful thing to hold and was my book of the month too.
Posted by Paul @ Halfman, Halfbook at 01:20