Welcome to my blog for the third stop on the tour for the Wellcome Book Prize #BlogTour. Follow the hashtag #WBP2018 on twitter to find the others participating in this: 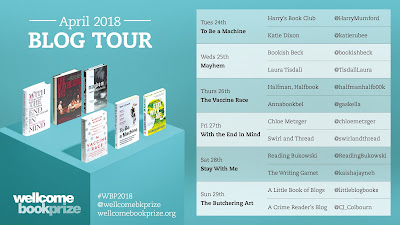 The Wellcome Book Prize is focused centred on science and celebrates the best new books that illuminate our encounters with health, medicine and illness. This means that the subjects covered by the prize do not always make the easiest of reading. This year we have a fictional book on the pressures of continuing the family line in Nigeria, there is a book that considers the future of humanity and the possibilities of trans-human development. Most of us reading this would not be alive if it were not for the pioneering work of Joseph Lister, or the work that has taken place in vaccine research, subjects brilliantly covered by two of the shortlisted books. The drug culture in Western societies is now endemic, but how it affects families is often glossed over; one of the books on the shortlist talks about just how it can affect anyone at any level of society. There are three things guaranteed in life: your computer crashing, taxes and death, the final book on the shortlist is prepared to tackle the taboo subject of death. 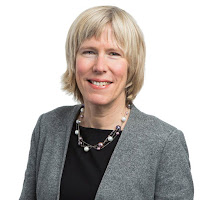 Today I am sharing an extract from The Vaccine Race by Meredith Wadman. She is a  reporter at Science and has written for Nature, Fortune, the New York Times, and the Wall Street Journal. A graduate of Stanford and Columbia, she began medical school at the University of British Columbia and completed her medical degree as a Rhodes scholar at the University of Oxford and has covered biomedical research politics from Washington for two decades. She lives in suburban Washington with her husband, two sons and two dogs.  She loves walking the dogs, talking with friends and reading histories and biographies. 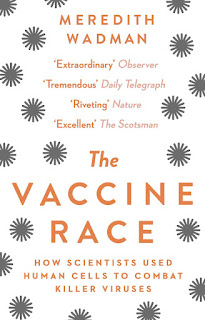 To remove the history of human exploitation from vaccines and medicines that were developed in the postwar era is impossible. The knowledge that allowed their development is woven into them. Should we therefore shun them? Definitely not. Take rubella as a case in point. As I write this in the summer of 2016, 1,700 babies in a dozen countries have been born with abnormally small heads or other brain malformations; their mothers were infected with the Zika virus while pregnant. Zika’s emergence is a vivid reminder of what life was like in the United States in 1964. Then, there was no rubella vaccine and tens of thousands of American babies were born gravely damaged by the rubella virus, which selectively harms fetuses in the womb. Like Zika, rubella homes in on the brains of fetuses; it also ravages their eyes, ears, and hearts. But today, thanks to the vaccine that was perfected in experiments on institutionalized orphans and intellectually disabled children, indigenous rubella has been wiped out in the Western Hemisphere. Cases occur only when they are imported from other countries. We can’t turn the clock back. The only way we can partially make it up to these children and untold others is to honor their contributions by making them meaningful – by continuing to vaccinate against rubella and the other diseases that made childhood a perilous journey before vaccines against them existed. We also need to strive constantly to enforce and improve the regulations and laws that protect research subjects so that in the future such abuses never happen again. We might also remember, when judging the men who took advantage of vulnerable human beings in order to advance both human health and their own careers, that they were creatures of their time, just as we are of ours. Rather than training our criticism on them, it might be more useful to ask ourselves this: what are we doing or accepting or averting our eyes from today that will cause our grandchildren to look at us and ask, How could you have let that happen?

It is a fascinating book about the development of the vaccines that have saved us all.
My review for The Vaccine Race is here. I have read all the others on the shortlist too, click on the title to see the reviews.

Stay With Me by Ayọ̀bámi Adébáyọ̀
The Butchering Art by Lindsey Fitzharris
With the End in Mind by Kathryn Mannix
To Be a Machine by Mark O’Connell
Mayhem: A memoir by Sigrid Rausing

Don't forget to visit the other blogs to see what they are saying about the other books on the shortlist:

A Little Blog of Books