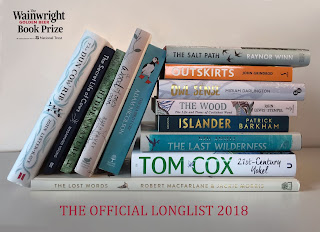 This is the fifth year of this prize and the books that make it onto the longlist keep getting better each year, and it is a varied selection again this year. The scope of the memoirs is quite broad, there is Sir John Lister-Kaye’s memoir of his journey to the creation of the Aigas Field Centre and Alys Fowler’s very personal journey through relationships and the waterways near her home. For some people, the closest they get to nature is by living near a designated green belt area, and John Grindrod’s Outskirts is a celebration of these green lungs surrounding our cities. Tom Cox has always striven to do things differently and his book 21st-Century Yokel carries on in that vein. Not only did it set a record for the fastest funded book on Unbound at the time, but he uses it to explore the countryside in his own unique way.
It wouldn’t be a Wainwright longlist without John Lewis-Stempel appearing on it. He only has the one this year, The Wood, a celebration of a small copse on his farm that even the shortest of visits to would be sufficient to recharge his soul. This is also a theme of A Wood of One’s Own by Ruth Pavey; she bought a small wood in the West Country because she wanted to and she could and it has been a place she has grown to love. Books about animals make up a quarter of the longlist. Rosamund Young tells us about the cows on her farm that have characters of their own. Owl Sense details Miriam Darlington’s desire to see all the native owls of the UK, but it becomes a bit of an obsession, so she heads to Europe to see even more. Adam Nicolson’s book, The Seabird’s’ Cry, is as much a polemic on the crisis that is about to engulf our ocean travellers as it is a study of their lives and journeys.
Even though we are a small island, there are still places where we can experience the wild. Neil Ansell needs those moments of solitude and his book is about returning to the same part of Scotland to immerse himself in the landscape there. Patrick Barkham’s journey around our archipelago takes in eleven islands of different sizes and perspectives as he talks to the people that live on them or discovers about those that used to. Raynor Winn’s book, The Salt Path, starts off with a series of bad news; terminal illness, loss of livelihood and home, but as her husband and her walk the South West Coastal Path on a minuscule budget they are healed by the natural world. This year for the first time there is a children’s book on the longlist, The Lost Words. This beautifully illustrated book has inspired people all around the country to run crowdfunding to get copies of it into schools and get children to write their own spells to acclaim the natural world.
How the judges are going to get this down to a shortlist of six, I do not know.
My reviews for all thirteen books are all here:
21st-Century Yokel by Tom Cox
Hidden Nature by Alys Fowler
Outskirts by John Grindrod
Islander by Patrick Barkham
The Secret Life of Cows by Rosamund Young
Owl Sense by Miriam Darlington
The Dun Cow Rib by John Lister-Kaye
The Last Wilderness by Neil Ansell
The Salt Path by Raynor Winn
The Seabird's’ Cry by Adam Nicolson
The Wood by John Lewis-Stempel
A Wood of One's Own by Ruth Pavey
The Lost Words by Robert Macfarlane and Jackie Morris