#BlogTour for Stranger In My Heart

Welcome to Halfman, Halfbook for my stop on the blog tour for #StrangerInMyHeart. This book is about Mary Monro's father, John and his activities in World War II.  I will be reviewing it below, but first a little about the book. This is the cover: 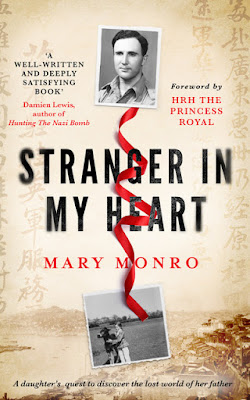 John Monro MC never mentioned his Second World War experiences, leaving his daughter Mary with unresolved mysteries when he died in 1981. He fought at the Battle of Hong Kong, made a daring escape across Japanese-occupied China and became Assistant Military Attaché in Chongqing. Caught up in Far East war strategy, he proposed a bold plan to liberate the PoWs he’d left behind before fighting in Burma in 1944. But by the time Mary was born he’d become a Shropshire farmer, revealing nothing of his heroic past. Thirty years after his death and prompted by hearing him described as a ‘20th Century great’, Mary began her quest to explore this stranger she’d called ‘Dad’. Stranger In My Heart skilfully weaves poignant memoir with action-packed biography and travels in modern China in a reflective journey that answers the question we all eventually ask ourselves: ‘Who am I?’ 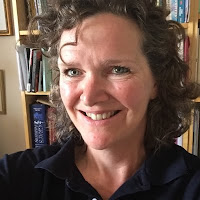 This is Mary's first book, but she is an accomplished writer of technical and academic articles as well as being an experienced lecturer and presenter. She is currently resident in Bath with her husband Julian and their dog, Gobi. Animals have been a big part of her life, she grew up riding horses and inevitably falling off them too, so has a raft of injuries. This has not stopped her riding though. Mary's first job was working with Cadbury's and had never shaken the chocolate habit, next came a spot of consultancy, but a career change meant that Mary now works as an osteopath treating animals and humans.

When her father died, Mary was only 18. She never really knew him as a person, just as a slightly remote father figure who had loved running the farm where she and her three siblings lived. She had a happy childhood, grown up fairly self-reliant, had a love of horses and freedom, but his death left a void in all their lives. Mary would never have the opportunity to ask the questions that she wanted too. It was a few years after when she was at a party an old family friend of hers said that he was one of the great war heroes, that she realised that she knew so little about him. This book is the answer to the question; who is my father.

John Monro was born in 1914, at the dawn of the Great War and was schooled in Switzerland of all places. He joined the army as a Gentleman cadet in 1932 and was commissioned in 1934. In 1937 he was posted to the British colony of Hong Kong in the 8th Heavy Brigade of the Royal Artillery and was put in command of a troop of Chinese men. He had an interpreter called Cheung Yan-Lun who was born in Guangdong. They got on so well they were to become lifelong friends. Further appointments and promotions were made and he ended up at the HQ in Hong Kong with the rank of Brigade Major. This was early in 1941 and with the war in Europe there were even more rumours about a possible conflict in the far east but nothing had happened so far.

By the end of the year everything had changed; Japan had invaded and Monro was heavily involved in defending Hong Kong, but it was to no avail and the colony surrendered to the Japanese. Monro was one of those captured and sent to a POW camp. It classic English fashion, it wasn't long before he escaped by swimming over to the mainland. This was the first in a series of dramatic events as he takes a long and convoluted route over 1200 miles to reach China’s wartime capital at Chongqing where he was once again involved again in the war effort.

All of these details Mary found out in the large envelope of letters and other documentation that was forthcoming from her mother. It was quite a job to collate and organise it, but possibly slightly harder to read his handwriting! To really get a feel for the places that he travelled through whilst evading capture would mean a trip out to China. Even though China is far more open than it used to be and there are the well-worn tourist trails to the Great Wall and the Forbidden Palace, there are parts of it that are still not easy to travel around, but thankfully she found a company and guide who were willing to help her see the place that her father once travelled through and her mother paid towards the trip as she was equally curious as to what had happened in his past life.

These personal histories of family members add so much more to history than the slightly tedious and dry military reports and official histories of events. Not only do you get to see the person in a different light, but the author's emotional involvement makes for much better reading. It is the same with this journey to uncover the stories of her father John, a private man who like so many of his generation, did his duty and thought no more of it, let alone want to talk about it.

We are all geniuses with hindsight, you can sense her regret about not taking the time when she could to get to know him and understand what he went through during the war. This story of his life is her tribute to her father for all he stood for and all that he meant to all of his family. If you liked Dadland about Tom Carew's escapades in World War II then this is another book that will appeal and that fills in the patchwork of personal stories about a war that changed the world.

Stranger in my Heart will be available from the 9th June in Kindle and paperback and is published by Unbound.

This tour was arranged by Anne of #RandomThingsTours

Thank you for stopping by. Don't forget to visit the others on the tour to see what they had to say about the book. 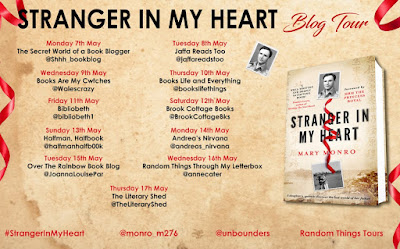